How I Shot It - Panning With A Slow Shutter

This is going to be a first in a series of Blog posts I'm gonna do going over how I shot a particular image. As a hobbyist photographer who occasionally gets commissioned to shoot stuff for people and organizations, I'm always interested in how other photographers achieve the results that they get for their shots so I figured I'd go into how I achieve the results I get when I go out and shoot. For the most part, I'm going to feature and concentrate on my sports related photos since they offer up the most diversity in results.

Take this photo as my first example. This was shot during the Gastown Grand Prix, a criterium style bike race that is held in the historic Gastown area of Vancouver, Canada. The Gastown Grand Prix is part of a week long series of races that make up what is called B.C. Superweek and is held every July. It's a super awesome race; it's fast, it's rough, and a fantastic opportunity for photographers to get awesome shots. 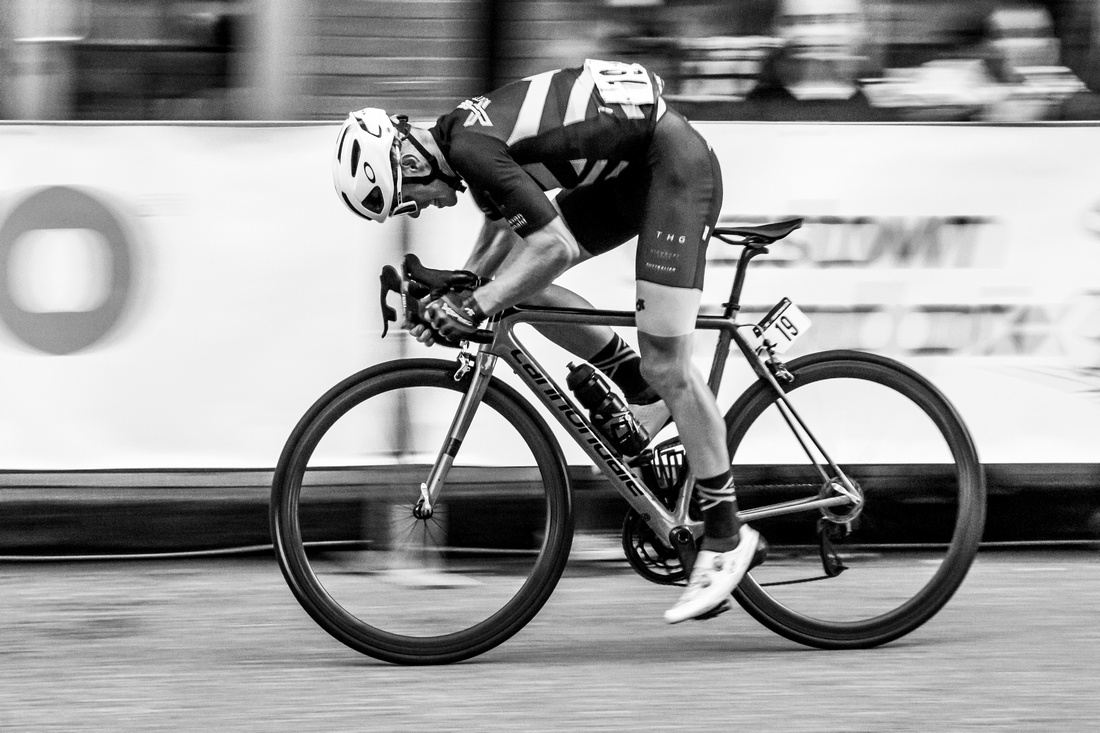 For The Win - Bike RacingRoad bike racing is intense, especially Criterium racing. Racers speed around the course at breakneck speeds, jostling for position and trying to lead each lap until the end. This 3:2 ratio photo captures the concentration and intensity of the bike racers and is suitable to be printed up to 36in x 24in for your space.

Now prior to getting this particular shot, I shot a ton of photos from various vantage points around the course. Some super wide (10-20mm) overhead style shots, some low angle, "under the fence" style shots, some head on and "back of the pack" style shots, and about half way through the race, and since I had my trusty 70-300mm Sigma still on, I wanted to see if I could get a panning shot that isolated a particular rider. I had shot some panning shots earlier on using either my 10-20mm or my 18-55mm, and they were cool and all, but I wanted a more intimate panning shot showing one rider and hopefully, with a little luck, isolating the effort, the grit, the facial expression and the speed of the action. A very important aspect of getting a good panning sports shot is making sure you have a background that, when you are panning against it, shows the motion and speed. Being closer to action is better as well, and for this shot, I was about 25ft from the rider. Now, since I shoot with an APS-C sensor sized camera, shooting at 70mm is the equivalent to shooting at about 105mm. 25ft away from a subject at 105mm focal length is about perfect to get the rider filling the frame, capturing enough detail, and getting enough background to show the motion and speed. According to me at least. ;)

So, in order to get this shot, I positioned myself about 100ft from a corner that the riders had just come around and were starting to accelerate down the back straightaway. This meant that most of the riders were out of the saddle, stamping on the pedals, exerting maximum effort to get up to speed. As the riders were accelerating I would follow them with my lens, matching my panning motion to their speed and, in burst mode, fire of a series of shots as the sped past. Again, shooting at 70mm, I was able to get all of the rider filling my frame which made it easy to keep my eye on what I capturing. Now, while shooting in burst mode while panning, you are bound to get some bad, out of focus, blurry, or just weak shots, but there's bound to be at least one good one in the mix. They don't call it "spray and pray" for nothing. ;)

My settings, after some trial and error, for this shot were as follows:

1/100sec (not as slow as you thought it would be huh? this rider was MOTORING!)

ISO 3200 (this was shot in the evening and in the middle of the city, where there was VERY little sunlight or ambient light available)

Now, of course, my settings for this shot are VERY particular for THIS shot and really can't be duplicated over and over again to get the same results for every panning sports shot, and this highlights the need to do some work in order to get the results you want. You have scout your location, pick your spot, picture the result in your mind, do some test shots, and set up/test/change/lock in your settings to reflect to type of shot you want to achieve. I just want to re-iterate that the settings are the LAST thing you should dial in. Your positioning, your spot, and your vision should be the most important thing when setting out to get shots like these.

I really hope this helps you all in achieving the results you're after when it comes to your slow shutter, panning sports shots. Now get out and shoot!

P.S. This photo, and a host of others, is available as a print or digital download in my shop: JWPhotoworks Shop