Full caveat: I have not had my morning coffee yet, so bear with me. You see, I started doing the "intermittent fasting" thing a few weeks ago, and as such, I can't have anything to eat or drink until noon. Well, I mean I could have black coffee, but ewww, no thanks, I can wait. Anyway, yes, the fasting thing is going ok, I'm down a few pounds, thank you very much.

Now, about that Star Trail quick and simple tutorial you came her for. I'm going to make this really simple and lay out my technique on how to achieve this result: 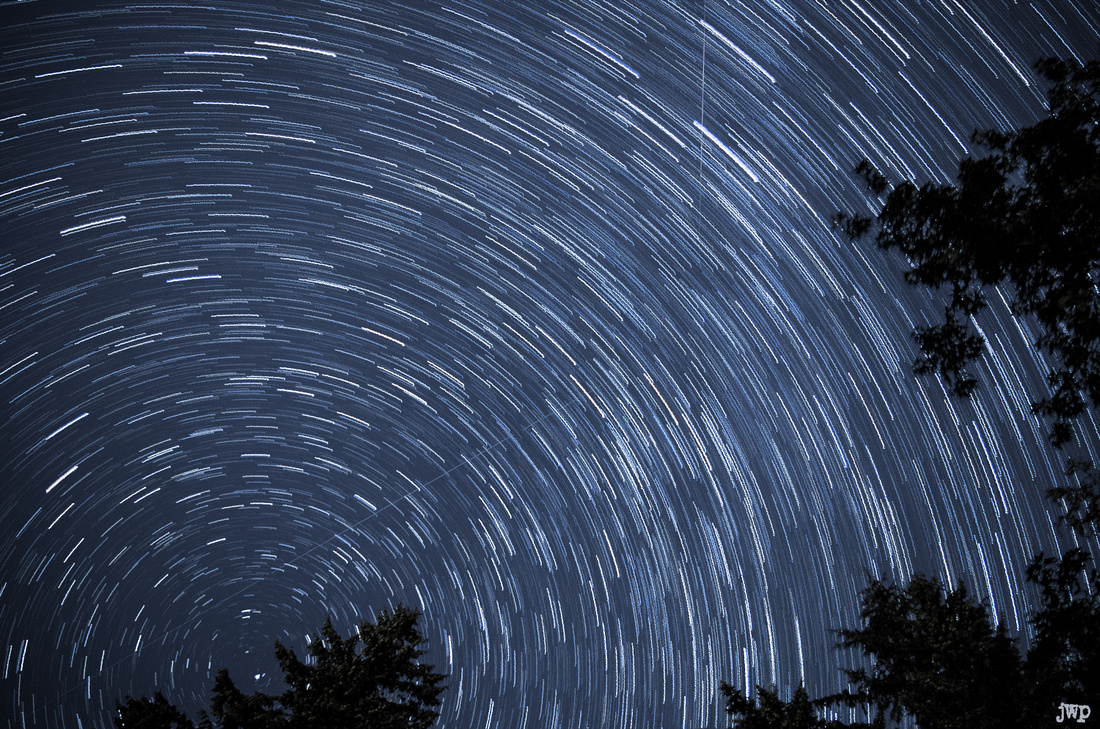 It's really easy, all you really need is a DSLR that allows manual control, a tripod, a remote shutter release, and time. Oh and a lawn chair, VERY IMPORTANT!

Now, I mention a remote shutter release, which is great, and they are very handy for lots of things and inexpensive, but if your camera has a built in intervalometer (the ability to shoot time lapse), that's actually better. Either way, whatever you have or what your camera has that allows you to snap photos without touching the camera will work.

First thing you should do is find a good spot to set up that is kind of away from city lights, to reduce the amount of light pollution that might creep into your photos. You don't need to be a million miles away from civilization though. The image that I'm showcasing in this tutorial was shot atop a local small mountain/hill here in Vancouver, that houses Simon Fraser University. It's smack dab in the in the middle of Greater Vancouver and surrounded by urban sprawl.  As long as there are no major lights immediately around you, you should be fine.

Next, set up your camera on your tripod and your lawn chair. I like to point my camera as straight up as possible, and maybe, as in the case of this photos, frame the image with some foreground objects like trees, or a structure of some sort. From there, you'll need to set your camera on manual focus and focus your lens (I use an 18-55mm) to "infinity". That's the little symbol on the end of the lens that looks like a figure 8 turned on it's side. That way, all the stuff in your photo will be in focus, you know, 'cause it's super far away. Stars...am I right?

Now come the settings. After shooting a few of these things, I tend to use the same settings for most of them, because, well, they work. The settings I use are as follows: 18mm, f4, 30 second exposure, and ISO 400. Now, my camera has a built in time lapse feature, so I set it to shoot 1, 30 second image every 30 seconds so I don't need to use a remote shutter release, but if your camera doesn't have the time lapse feature, you'll just need to hit that remote button after every 30 second exposure has completed. Same result, different technique.

What you will end up with is a bunch of 30 second exposures. How many will depend on how long you want to sit outside shooting them. The more you shoot, the longer your star trails will be. For this image, I shot 57 images, which was about a half an hour of shooting. Next thing we have to do is process them in either Photoshop or Lightroom. I usually process my time lapse and multi exposure projects in Lightroom, because I think it's better for working on projects that involve a lot of photos that are of similar nature. I do a few little tweaks and what not to the images, but there is no "one size fits all" approach to how the individual photos should look. Everyone has their preferences, so I'll leave that up to you. The most important thing to do is, if you are shooting in an urban environment, is to "cool" the images down, because you'll probably have some "warm" cast to the photos from the light pollution in the area. Here's an example of the tweaks I did to one of the images for this project: 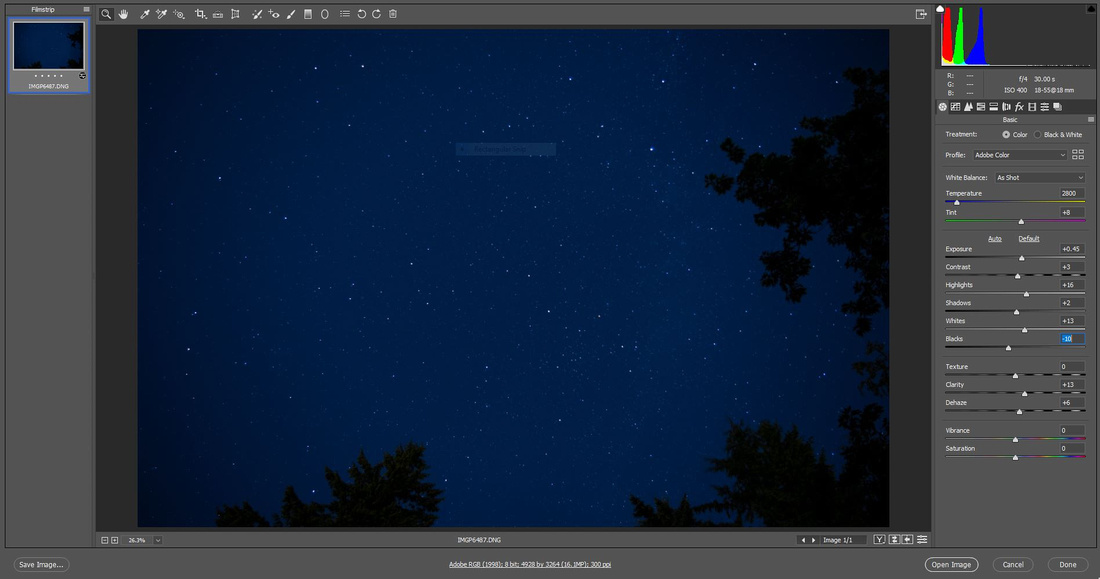 Once you've processed your images, you'll need to put them into a folder so that Photoshop knows what to do with them. Once you have them all in a folder, in Photoshop, go to File - Scripts - Load Files Into Stack and select the folder and photos you want to stack. Photoshop will them load all the photos as layers, like this: 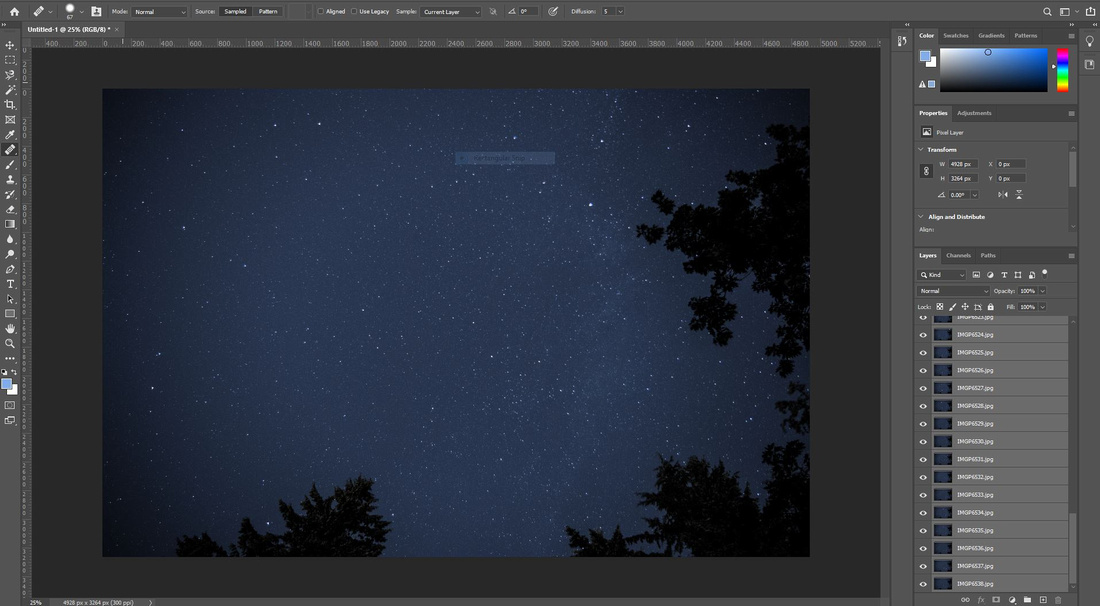 From there, select all the layers and change the "mode" (the drop down menus above the list of layers) from "normal" to "lighten" and you should have something like this: 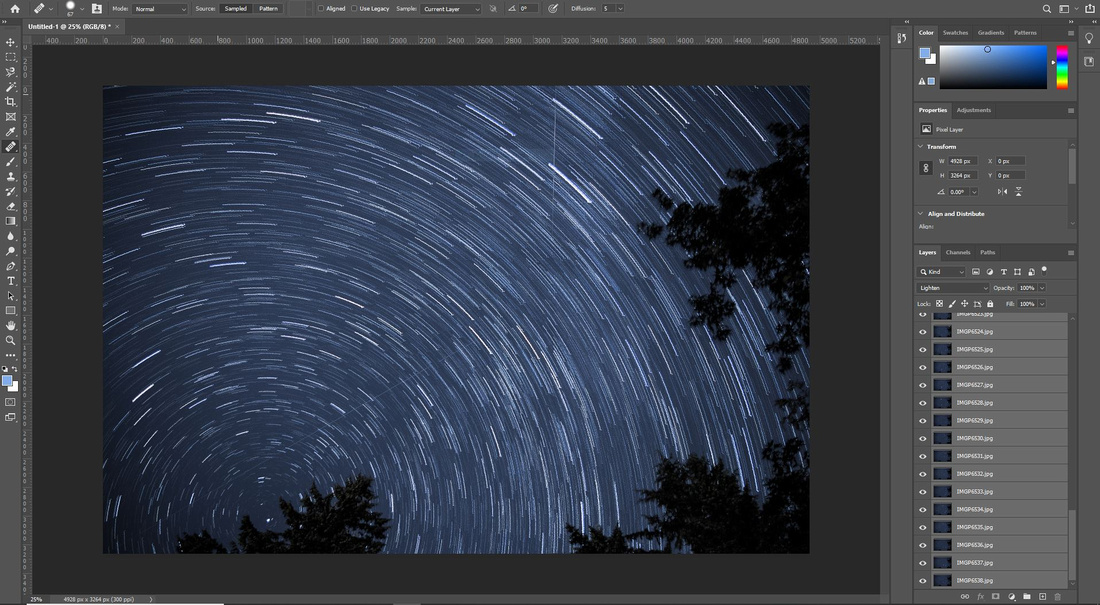 Cool huh? From there, you can save your image as a JPG and share with all your friends!

Simple, easy, and fun to do!

Thanks for reading, and for more cool Adobe Lightroom tutorials, check out SLR Lounge